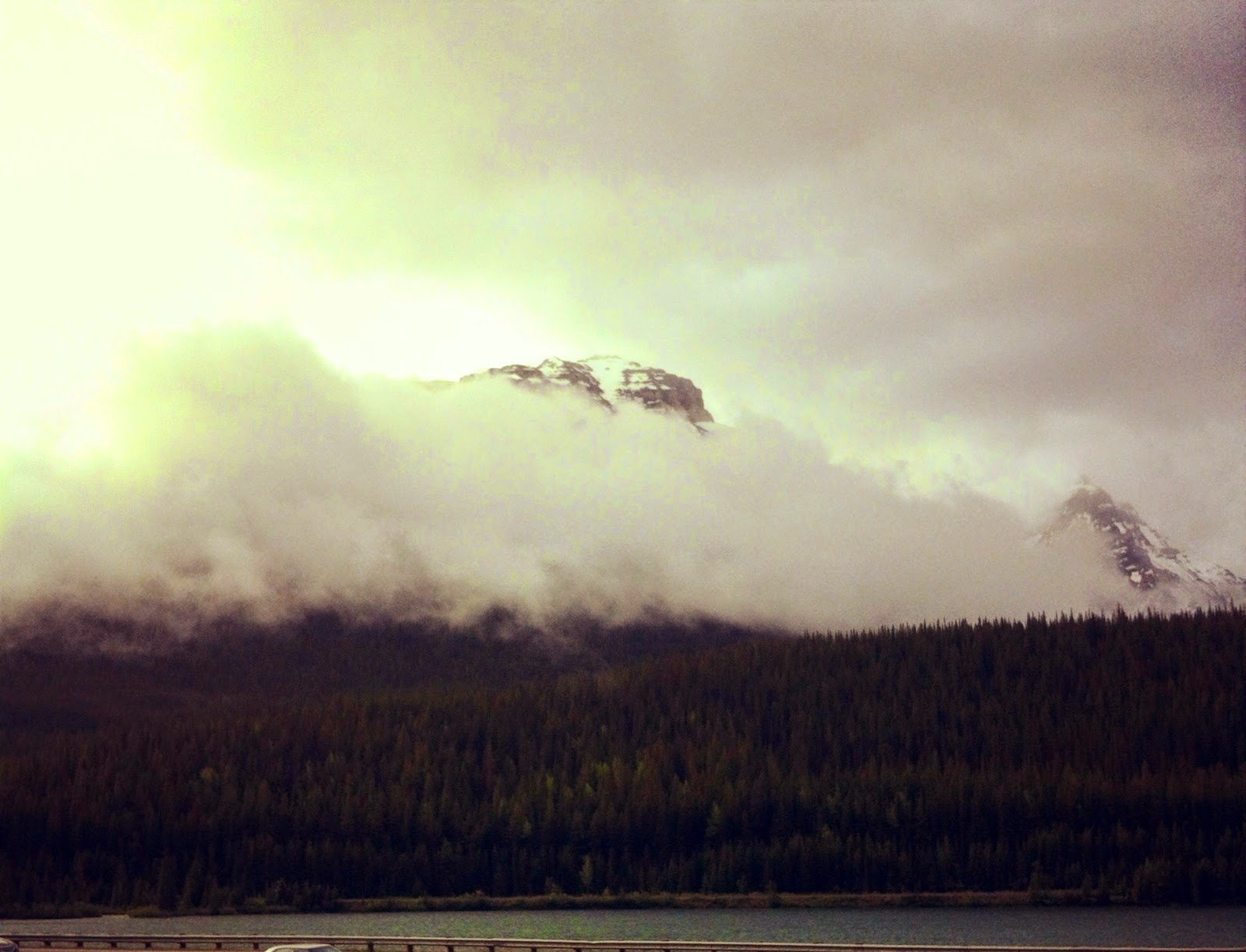 Dave and I took off for the Canadian Rockies to enjoy some time in the great outdoors.  For this trip, we decided to make our way up to Abbot Pass Hut, Canada's second oldest mountaineering hut (and location of Canada's supposed highest outhouse!).

I knew going into the trip that the ascent would be fine; however, I was (and always have been) a bit nervy about the descent.  Let's just say I don't like the second half of the saying, "What goes up..."

We drove out on Friday afternoon following my yoga class.  We drove 8 hours, listening to Canada Day special broadcasts on CBC Radio, chatting and noshing on snacks we packed up before we headed out of Moose Jaw.  Our destination was just over the Alberta border, near Field, British Columbia to The Great Divide Lodge where we hoped to catch a few hours of sleep before catching the 8:30 AM bus to Lake O'Hara, where we would begin our hike up to Abbot Pass and hut.

We arrived at the lodge at 2:00 AM, just before they closed the registration desk for the night and quickly made our way to our room to jump in bed and get some shut-eye.  We woke the next morning feeling groggy and chowed down on some tortilla wraps full of bananas and almond butter to fuel us for our ascent.

The nice thing about the Lodge is that it was literally a three-minute drive from where we needed to catch the bus.  We drove over, parked our car and queued up with other hikers to jump on the school bus that would drive us the 20 minutes up to Lake O'Hara.  Some on the bus were doing the same climb as we were while others were just going to up to O'Hara to enjoy the day trails that are there.

The bus rattled and rolled over the rocky road and people were in good spirits as we headed up.  Dave and I chatted and yawned attempting to wake ourselves up.  When we reached the lake, we off-loaded our packs and prepared ourselves for the day ahead.  We had asked about the conditions on the climb and were told that there were a number of snowy sections and that novice hikers had been turned around by the amount of snow that remained at higher altitudes.  Dave and I were determined not to turn around!

The climb begins with a gorgeous trail that hugs the shore of Lake O'Hara.  You are surrounded by pines and can ogle the cabins that rent out there for between $300-$400 per night (much more gucci than the hut we would be calling home for the next two nights!).  We continued on the well-marked trail that would take us to the halfway point - Lake Oesa.  We passed through forest and hugged a river rich with water from melting snow.  We climbed through rocks and boulders left by glaciers long gone and finally saw the icy surface of Oesa in front of us.  We took a brief pause to have a little bite to eat, put on our gaiters and helmets and assess the ascent route up to the hut.

It was clear spring has been slow in coming.  Snow covered the majority of the route and we knew it would be slow going as the snow surface seemed to crumble around our feet with every step.  The snow surface covered slippery scree underfoot and each step had to be made with careful consideration.  I discovered that quickly when, at one point, I placed my right foot, only to have it keep going.  I slid a good body length and when I finally stopped, looked up the slope with tears in my eyes at Dave - scared out of my mind!

After my slip and slide, we continued up - slowly picking our steps and assessing our path along the way.  We followed in the footsteps of those who went before us, relying on their toe holds and matching their ascent plan.  When we finally summited, it was the biggest feeling of relief!

We made our way into the hut which is just...awesome.  There are two large communal tables, a kitchen stocked with pots and pans, a wood-burning stove and an upstairs bunk area that sleeps 24.  The hut itself is made out of huge stones...all of this was brought up by both horse and man and provides mountaineers a wonderful space to get warm, grab a bite and put their feet up.

When we summited, the weather was fairly good, but it quickly turned wintry as blizzard-like conditions set in.  Horizontal snow, cold temperatures and howling winds surrounded the hut for the next two days.  None of the mountaineers who came to summit the two peaks on either side of the hut - Mount Lefroy and Mount Victoria, were able to make their ascents due to the conditions.  Dave and I prepared the food we brought up, enjoyed nips of Scotch and kept the fire burning to keep us warm and dry.  We kept our fingers crossed for better conditions on Monday when we would be making our descent.

Monday dawned and we rose at 3:45 AM with a group of gentlemen who were hoping to summit Lefroy.  Unfortunately, while it didn't work out for them, the weather improved and we all began picking our way down from the hut around 7:00 AM.  While it took us five hours to summit, the downhill only took us two!  We slid our way down and carefully heel-stepped ensuring we weren't going too fast to be unsafe.  I am terrified of going downhill, so Dave's guidance and reassurance were much needed and appreciated during this time!

We made it down and marvelled at how gorgeous the weather was...sunny skies and warm temperatures greeted us as we once again boarded the school bus to take us back to the car.  That night, we celebrated our achievement with pizza at Rocky Mountain Flatbread Company in Canmore and a couple of pints of Grizzly Paw Brewing Company's best brews.

These trips are needed.  They give us time to reconnect...to ourselves, to each other and to nature.  Now, on to our next adventure!

For a little taste, check out this video below!