I have to say, returning to Moose Jaw after being in the warm sunshine of Atlanta has made me tired of winter.  I had been handling the cold temperatures well until Friday when I saw that the wind chill was once again in the -30s (both F and C).

Because it has been so cold outside, Dave and I started our series of long runs on the treadmill and there is nothing like pounding out ten, twelve, or fourteen miles on a looping belt to make you feel as though you might be looping a bit in your head as well!  Needless to say, Dave and I are officially registered for the Saskatchewan Marathon in May and are excited and hopeful for a warming trend from Mother Nature so we can get back out on the trails and soak in some vitamin D.  The training is going well and we are excited to cross the finish line together in Saskatoon.

This evening promises to be a grand one with a Febtoberfest in the works.  Friends, brats, sauerkraut, lentil stew, and a yummy potato bake are all in the process of being made as I take this quick break to pound this out.  Back to the kitchen with me...more later!
Posted by Heather in the Jaw at 1:52 PM No comments: 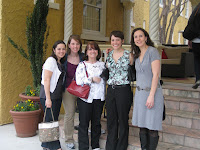 A weekend away with my closest girlfriends and family in a city where the temperature wasn't threatening frostbite was just what I needed! As a result of the way Dave and I got married last May (it was a surprise engagement and wedding for me!), I missed out on some of the more "traditional" lead-ins to married life. As such, my sister Melissa, my mom, and my best friends whom I've known for more than ten years, Katie and Mariah, decided to throw me a wonderful (un)bachelorette weekend celebration in Atlanta, Georgia! My sister and her family currently hail from the peach tree state, and, since the rest of us have been enduring a rather harsh winter, nothing sounded better to this group of women than a weekend in the south where jackets are optional in the month of February.

We had a fantastic time! We stayed in a boutique hotel in Midtown -- the Artmore. We dined at Atlantic Station on sushi, played games from our youth in our hotel rooms while sipping wine, enjoyed the warm sun on our faces, and ate way too much chocolate, cheese, and other goodies! Katie and Mariah even designed t-shirts for us to wear that read "Un-Bachelorette Weekend -- Atlanta 2011!" It was so incredibly fantastic to be with everyone -- trading stories, catching up in person, and giving each other words of encouragement, love, and advice as we all navigate marriage, career, parenthood, home-buying/renovating, and moving.
The absolute highlight of the (un)bachelorette weekend didn't have anything to do with us. The gals arranged for us to volunteer our Saturday morning at an amazing organization called Open Hand. They know how important giving back is to me and I was pumped that they decided to incorporate that into our weekend!! Open Hand is an organization that seeks to provide nutritional meals to prevent/manage chronic disease.
Here are there mission and vision statements:
Mission:  Open Hand helps people prevent or better manage chronic disease through Comprehensive Nutrition Care™, which combines home-delivered meals and nutrition education as a means to reinforce the connection between informed food choices and improved quality of life.
Vision:  Open Hand seeks to eliminate disability and untimely death due to nutrition-sensitive chronic disease.
It was awesome! We helped the culinary team in their kitchen by placing hundreds of marinated chicken cutlets on trays to be cooked. We bagged meals for recipients and chatted with the other volunteers who were there from a local company. There are other ways for folks to help as well by driving routes and delivering food, donating to the organization, and assisting with programming. The staff was amazing and passionate about their work and I was so excited to be there with my mom, sister, and good friends on a gorgeous Saturday morning bagging good, whole food for the people who most need it. 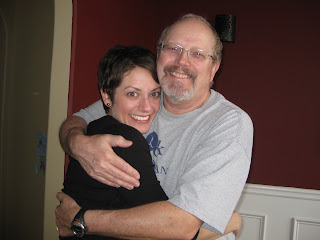 My dad was in Atlanta too and we squeezed in a run one morning! 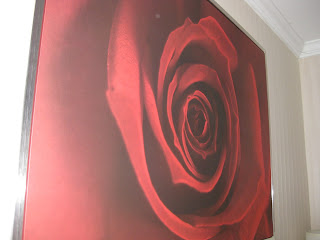 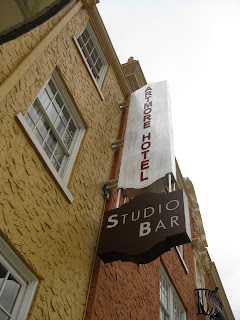 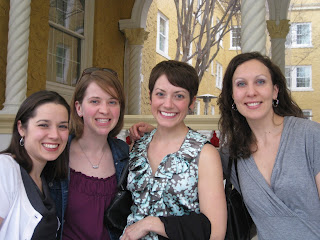 Melissa, Mariah, me, and Katie 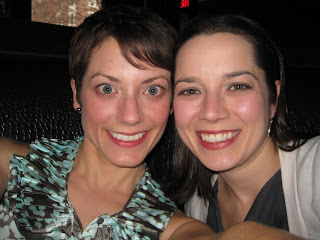 Me and my GORGEOUS sister! 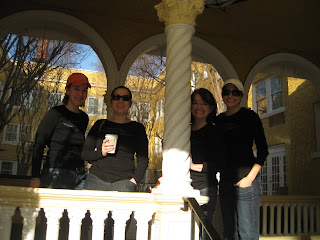 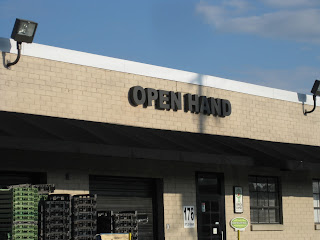 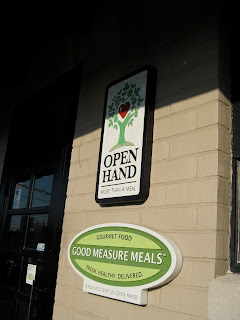 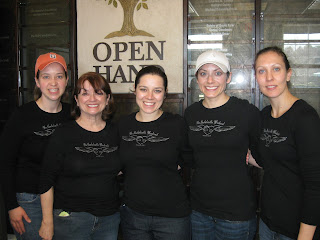 In the Open Hand office after volunteering... 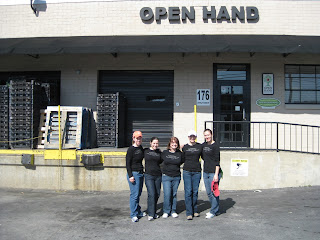 Such an incredible weekend and I am so lucky to have such fantastic people in my life!
Posted by Heather in the Jaw at 6:32 PM No comments:

Moose Jaw Minute #26: My Second Valentine's Day in the Jaw

It is the time of year for hunkering down and getting cozy with the ones we love...be they friends or family.  The dark winter days are beginning to shorten, the temperatures are warming just ever-so-slightly, and my cravings for all things dark chocolate and bread are at an all-time high.  Valentine's Day MUST be around the corner!

This is, in fact, my second Valentine's Day in Moose Jaw.  I surprised Dave last year and flew in for my first visit to what would eventually become my home.  It was dark.  And cold.  I remember landing late at night, watching the steam rise from the airport out of the darkness that surrounds Regina and Moose Jaw.  I wasn't sure what I would find or who I would meet!

On this Valentine's Day, one year later, I figured I would share with you the things I love about being here in Moose Jaw!

As it is the season of love, I feel it would be remiss not to give a little nod to cupid.  One of my favorite things is listening to StoryCorps. I heard this story a while ago and was really excited to see that it had animation attached!  Enjoy...

It's a good reminder of the endurance of love and support -- how important they are.  I get my love and support from family and friends...thanks to all of them and I wish you all a very Happy Valentine's Day!
Posted by Heather in the Jaw at 8:32 AM No comments: 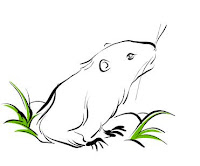 Happy Groundhog Day!  Yes, indeed, the tradition is alive and well -- not only in the States, but also here in Canada with their very own albino groundhog weather predictor, Wiarton Willie!

Oh, yes...much like the beloved groundhog Phil of Punxsutawney, Pennsylvania, Wiarton Willie from Wiarton, Ontario comes complete with his own festival of wintry goodness as folks from all across Canada wait with bated breath to see just how long this winter will last.  With Moose Jaw wind-chills at -49F (-45C) yesterday, I think all of us in this town are hoping for an earlier spring rather than a later one!

So, what of Wiarton Willie and just how did this groundhog come to be so popular?  55 years ago, one of Wiarton's most famous residents, Mac McKenzie (now 83 and still attending the festival!) decided to throw a party for a group of friends.  The party ended up getting to be such a big deal that a local reporter showed up to cover the event.  Now, Mac advertised the party as a Groundhog Day party to introduce some lightness and laughter into the dark of winter.  When the reporter asked where the groundhog was, Mac tossed his furry toque into the snow, a picture was snapped, and, needless to say, a tradition was born and Groundhog Day in Wiarton has been in full swing since.  As to where the albino groundhog tradition comes in:


"..it seems that three wise groundhogs, Grundoon, Muldoon and Sand Dune broke hibernation to tell Mac of the birth of a white groundhog who would forever alter the world of weather prognostication. The white groundhog would be known for his uncanny ability to correctly predict the timing of spring and he would emerge each February 2nd to announce his prediction to those who spoke Groundhogese."
{source}
But wait!  What's that I hear?  Why, it's Shubenacadie Sam from Nova Scotia -- yet another groundhog that is set to predict an early or late spring.  Sam makes his predictions from the Shubenacadie Provincial Wildlife Park on Canada's east coast.  His weather prediction calling days began in 1987 and, due to his location, Sam makes the first prediction of the year for North America in the early morning hours of February 2.
I am shocked  (literally!) to find out that there are more players in the groundhog weather prediction field, including:
Punxsutawney Phil in Pennsylvania
Wiarton Willie in Ontario
Shubenacadie Sam in Nova Scotia
Balzac Billy in Alberta
Buckeye Chuck in Ohio
Brandon Bob in Manitoba
General Beauregard Lee in Georgia
Gary the Groundhog in Ontario (from Kleinburg)
Two Rivers Tunnel in Nova Scotia (from Cape Breton)
and, last but not least, Staten Island Chuck in New York
So, what were the predictions this year?  Well, it was a triple hit from the most famous of the groundhog forecasters!  Wiarton Willie predicted an early spring in the middle of a huge winter storm.  Schubenacadie Sam also predicted an early spring, despite the pounding the east coast of Canada is taking at this time from a winter-loving Mother Nature.  Punxsutawney Phil called an early spring as well, bringing cries of joy from a snow-buried Chicago and storm-lashed New Jersey, New York, and Massachusetts.
So, here's to dreams of warm spring days, more hours of sunshine, and a palette of colours different from the white, gray, and black we have become accustomed to here in Moose Jaw!
Posted by Heather in the Jaw at 5:15 PM No comments: