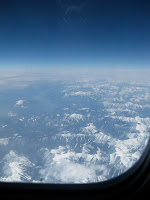 Hi, everyone!  Apologies for the lack of posts recently...I've been on the road to see family in Pennsylvania with Dave and then on to the Lone Star state of Texas to give a presentation for work.  I am noticing a change in travel for me.  When I first moved to Moose Jaw, travel felt more like home and being on the road was a comfort from the unfamiliar territory of my new surroundings.  I knew the drill at the airport, the comfort (yes, comfort!) of the airline seat, my tray table in its locked and stowed position, traversing the corridors of different terminals, and seeing everyone and everything in constant states of movement -- these things were familiar and recognizable to me as I attempted to navigate the new chapter of my life in the Jaw.

I travel quite a bit.  I often visit the place I lived the longest - Chicago - due to work.  I see family over holidays and family gatherings.  I  reconnect with the people and places that, for my first few months here, made me feel like I had a place to tuck into and find something to ground me.  In a lot of ways, Moose Jaw wasn't that for me in the beginning.  It was too new and my lifestyle too different for me to consider it comfortable and welcoming.

But, over the last few months, I've noticed a change.  Now, coming back to Canada feels more assured and familiar.  As I peer at the farmland from my tiny window on the plane, descending through the clouds over Saskatchewan, I know I am getting closer to my life in Moose Jaw -- a life which now feels much more familiar and comfortable than life in a multitude of different places.  As I criss-cross the borders between the United States and Canada, I also criss-cross different areas of my life, all contributing to the person I am becoming.  It's a good feeling.

I love to travel, but I also love coming home.
Posted by Heather in the Jaw at 9:36 AM No comments:

So, I spend some time marveling at the fact that I live in a place called Moose Jaw...in the province of Saskatchewan.  I mean, who knew that this U.S. Army brat would one day land a gig in the land of prairie dogs and living skies?  Not me...that's for sure.  I've traveled a lot in my 30-some years and while I may dish it out to the Jaw every now and then, I have to admit that there are some things around here that I would like to experience.

A colleague of mine at work recently sent me Fodor's five things listed about Moose Jaw.  Note:  only one of these is a "Fodor's Choice attraction" according to his guide.  Ironically, that one thing is really the only thing I don't have much interest in seeing, but I know I will eventually do that one day (most likely when I have company visiting from out of town).  What are these five magical experiences that Moose Jaw has to offer, you ask?  Well, here they are...in no particular order:


So, needless to say, these are Fodor's choices of things to do in Moose Jaw.  Personally,  I have my own top five and I'll be sure to share those with you in my next post.
Until next time...
Posted by Heather in the Jaw at 7:56 PM No comments:

Moose Jaw Minute #49: Our Holiday Weekend in the Canadian Rockies 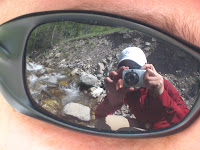 We...are...outta here!  That was our cry as we packed up the Cavalier with our camping gear and headed west to the splendor that is the Canadian Rockies.  We were on our way to Kananaskis County to a site just outside of Canmore, Alberta to tackle our very first scramble and indulge in some back country random camping.  There is nothing like driving from the f...l...a...t prairies and coming up on the Rockies...those gorgeous pieces of earth jutting into the sky!

We arrived late, late, late on Thursday night and stayed at the fantastic Hostel Bear.  If you are ever in the area, this is your place.  The rooms are clean, the bathrooms cleaner, and the hostel itself a quiet respite.  There is a train that goes by the space every now and then, but that didn't stop Dave and I from getting at least a few hours of shut-eye.  We woke the next morning to a chill in the air, crisp azure skies with puffy clouds, and the most gorgeous view of the Three Sisters peaks from our hostel window.  We stepped out and made a beeline for what is probably one of the best local coffee shops I've ever stepped foot in, Beamers.  YUMMY was the soy latte I downed!  Dave had a hot chocolate and that set us up for our one hour drive to Grizzly Peak...the location of our first attempt at a scramble.

"What the heck is a scramble?  It sounds delicious but I am getting the sense it has nothing to do with eggs." you might be thinking.  Well,  a scramble is a climb that falls somewhere between a really steep hike and rock climbing.  They are graded on a scale from 1-5, with 1 being the easiest and 5 the hardest.  Grizzly Peak is classified as a category 1 scramble and winds it's way beside Rock River Creek for the first little bit before making its ascent to the peak.

Attempt number one was made on Friday, Canada Day, with our heavy packs that were stuffed for four days of being away with clothes, gear, and food.  I should say a special thanks here to our friends Blake and Jac for the loan of their hiking poles!  We started the ascent and marveled at the view as we were going up...stopping every now and then to catch our breath and set down the gear for a minute or two.  The trail was pretty rocky with a lot of loose gravel and getting a solid foothold was sometimes pretty challenging.  In some ways, Dave and I are matched really well for this kind of thing...I adore going up hills and loathe the coming down bit. He is just the opposite.  As we were ascending, all I could think about was how in the heck I was going to get back down again!  We continued upward, spotting rocky mountain sheep, squirrels, brilliantly coloured flowers, and pine forest along the way.

Let's just say that with the packs, we were a little under prepared for what this would mean on the scramble.  We got about halfway up the route and to a place where there was some non-technical climbing.  Dave shed his pack and made the ascent first to check it out while I waited for him at the base of the rock.  A few minutes later, I saw his head pop over the edge and he started shaking his head...I knew what that meant...no way were we going to continue the climb with the heavy packs on.  We made the decision to head back down with Dave taking the lead and guiding me when things got really slick.  We hit the bottom in about half the time it took to get up and made our way across the highway to find a place to camp for the night.  After crossing into a valley and working through some forest, we found a gorgeous spot near a rapidly running stream and set up for the night.

The next morning dawned bright and warm and we quickly ate a yummy tofu scramble (how appropriate!) for breakfast, packed up, and then headed back to try the summit again.  This time, we hid our packs under some trees across the road and only brought our food bag with us (to avoid having some bears and other wildlife eat our goodness!).  This time, we reached the rock in under half the time, made our way up, and continued on.  I think we got confused along the way and had to double-back at one point along a grassy route where the trail just, well...trailed off!  We made it three quarters of the way up the peak and while I was feeling pretty good and solid, Dave was a bit more concerned about his footing and how he was feeling.  Neither of us were comfortable continuing if one of us wasn't feeling it, so we made the tough decision to head back down without reaching the top.  On our way down, we crossed paths with a group of rocky mountain sheep who were making their way up the peak -- delicately, lightly, and without a care in the world -- as they stopped occasionally to munch on some greens along the way.  We marveled at the speed and ease they exhibited going up and guessed that we probably looked about as far from that as possible!


Needless to say, I still very much consider this a success for our first attempt at a scramble and I personally cannot wait until we get to go back and try another one!  We made our way down and sat by the creek where Dave stuck his feet in and we chowed on a yummy lunch of cous cous salad.  I am super-proud of us for giving it a go and while we may not have reached the top, we gave it our all and got really far!

We wanted to camp at the same site that evening and were making our way back when we heard bear bangers going off.  And...well, they were close.  We had heard them going off up the valley while we were on the climb and it was sounding like they were chasing the bears up in our direction.  Rather than risk running into Yogi and Boo Boo, we made another tough decision to hike back to the car and find someplace a  little safer to bunk for the night.  We ended up car camping (ugh!) by the Lower Kananaskis lake and while the car camping wasn't great, the view across the lake was absolutely gorgeous.  We sat on the shore and enjoyed some hummus sandwiches as we watched the sun begin to set behind the mountains.  It was a peaceful way to end our trip...


Dave and I came up with a Top Eleven list for the experience:


It was a great Canada/Independence Day weekend...hope you had a good one too!
Posted by Heather in the Jaw at 6:47 PM No comments: